The call out comes late in the afternoon on the last day of 2012. “We have a lost hiker in Pinyon, call the rescue line with your availability.” A call to our call captain fleshes out the details. A man out for an overnight backpack has just been reported missing by his girlfriend in the steep ridges and canyon lands surrounding Martinez Peak.

We had planned to celebrate that night in the high country, ringing in the New Year with a bottle of wine and an inaugural snow camp. Holiday plans foiled again! Well, at least my pack will be ready for a rescue with just some minor editing.

We swing a hard left and pull into our designated base at the local fire station, tires biting into the gravel of the parking lot. The RMRU Rescue truck is already on scene and Glenn is conferring with the deputy. Lee and I join in. We learn that a helicopter in the area last night spotted a small fire along the east face of Martinez. A quick review of the topographic map and rough coordinates from the copter helps us to form a plan. Since it is unknown if this is our subject, it is decided that we need to cover as much ground as possible. In this type of scenario, it is likely that he will have taken the route of least resistance and headed down into the canyons below, but if not, we need to cover the upper elevations as well. 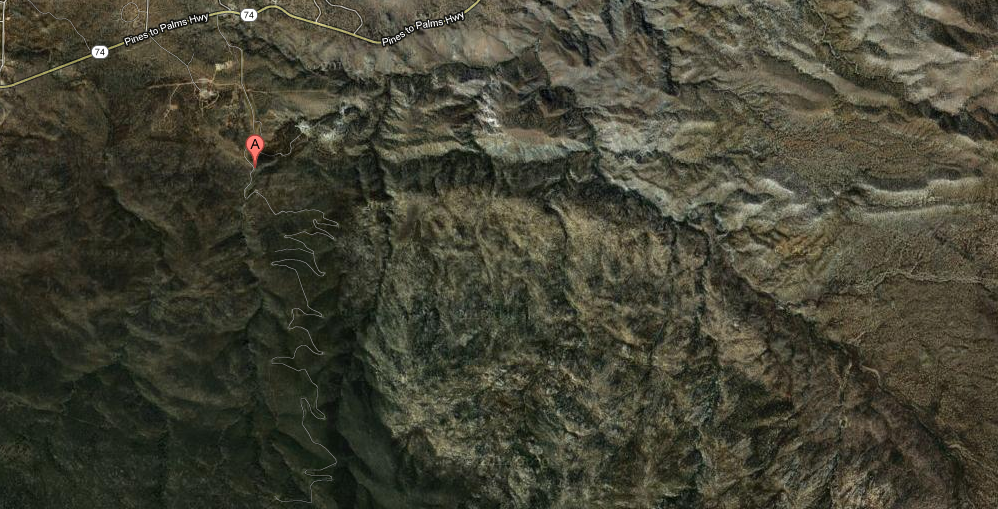 Lee and I throw our packs back into the bed of his truck and swing out of the parking lot and onto HWY 74. A sharp left off of the pavement onto gritty dirt takes us to Pigeon Springs road. The going is slow. The road is deeply rutted and the recent cold spell has left a fresh coating of crusty unmelted snow along the north facing switchbacks. At the mouth of each ravine we stop, turn off the engine and get out of the car to yell out, our voices echoing through the canyons. Our calls hover in the air for a while, but bring only silence as a reply

As we reach our target overlook, we hear from base that Les Walker and Ralph Hoetger are now on trail in the deep maze of canyons below us. Patrick McCurdy, Steve Bryant and Alan Lovegreen are en route and will be arriving soon to add strength to our numbers.

Looking down I have a clear view of the vast labyrinth spread out into the distance. After quieting the engine, we step out onto a thin crust of snow. It crunches beneath my heavy boots as we climb up onto a conveniently placed boulder to yell again. We aim our chests towards a large bare slope several miles in the distance. I start the count: “1…2…3…” I stretch my lungs full with air and we bellow out in unison: “Hello!” The sound reverberates through the canyons and disappears.

Suddenly, out of the silence, there comes a faint call. A man’s voice! We call again, and again… Holding our breath till bursting in the hopes that we will hear a return call… And each time, we barely make out the edge of a voice, far away. After the third call, there is again only silence in response to our yells. Maybe the wind has shifted, maybe our subject has grown tired, or maybe this is not even the man we are looking for. A quick call in to base confirms that none of the other rescuers have recently yelled out. They did hear our calls, and one also reports hearing the same lone voice calling back.

Next, the critical question: where did the voice come from?

Pinyon is a unique terrain for sound. As sound bounces across the land, the varying contours and vegetation will shape it differently. In our usual high country terrain heavy tree coverage on the reflecting slopes muffles the sound and spreads it out, the thousands of pine needles reflecting sound vibrations in thousands of directions. In Pinon’s mix of steep slopes, sparse brush, packed desert gravel and rock faces, sound can travel for astonishing distances as it hits and bounces sharply back like a ball off of a pool table.

Looking at the shape and angle of the slope from which the call is reflecting suggests to me that it is probably echoing to us from several miles to the South and East. This puts it roughly in line with the coordinates of the fire from the previous night. Still, we can’t be certain that this is our man. We also can’t be certain of the exact location of the voice. It’s not much to go on. After more discussion it is suggested by base that Lee and I join the Horsethief Creek crew and explore the lower canyons.

While Lee is on the radio discussing our next step, something catches my eye that is not marked on the topographic map. A trail peals off of our dirt road, heading to the east slightly below the elevation of the reported coordinates from last night. It is heading the correct direction to take us at least part of the way there.

I show my discovery to Lee. We have cell service, so we take a minute to research it on Google Earth. Bingo! There is a clear cut clear trail for an ample section of the hike. This presents us with a new option: the rest of the team is taking the low road, why not have us on the high road? If the subject was the source of the fire last night then we might be the best positioned to find him if we continue contouring the mountain towards the southeast at constant elevation.

We call in our plan for approval. “Base, this is team one… We’ve got an idea.” Lee quickly explains our plan and we receive the go-ahead to explore this new trail. Swinging myself out of the truck I feel the familiar bite of cold on my cheeks. It’s already in teens and falling fast. Lee and I cross check our gear and make sure that we have adequate food, water and extra warm clothing for what promises to be a frigid night.

We take our first steps down the trail as the sun looms low in west. Already in deep shadow behind the sharp ridge lines ourselves, the desert in the distance glows in contrast with a warm light. The excitement of discovering and exploring an unmarked trail fuels us and we make good time forward despite the cold. The rough brush has been cut back by pruning shears and trail ducks perched on boulders help guide the way. As we move through the unfamiliar terrain, we mark turnings in the trail by dragging deep cuts in the wet earth with our feet, knowing that we will likely have to find our way back in the black of night.

As we travel onwards, we discover unexpected benefits of our new trail. Traversing high up on the surface of the mountain, we are in a unique position to overlook the steep canyons and deep valleys below. The rescuers within the deep ravines are effectively isolated, their voices limited by the canyon walls. Their calls can only echo along their canyon or straight up into the night air- only carrying so far. Our position allows our voices to carry down into all the ravines stretching out below us.

We’re also in perfect position for radio relay. Our standard radio relay at Tewanet overlook has already lost contact with the team members in the deepest canyons, so we take over their duties. A new reliable location for relay is good information for future missions and we take special note. Even if we don’t find the subject, we’ve discovered a potential asset for the team on future Pinyon searches

A couple of hours into the dark hike, our radios crackle with encouraging news: “The copter thinks they’ve found him”! The darkness has revealed a new fire on the Southeast face of the mountain. Hovering nearby, the aviation crew communicates with the man by loudspeaker and confirms his identity. Great news! Unfortunately, this is New Years Eve and a helicopter crew that can hoist at night in the mountains is not available

Discussion ensues. If necessary, our ground team will be sent the many arduous miles cross country to secure the subject’s safety. After aviation confers again with the subject, this is deemed not necessary. Now that his location has been established and we know that he has enough supplies and warmth to spend one more night, the call is made to extract him in the safety of morning light.

As I follow Lee down the trail homewards the excitement of the search starts to wear off and I begin to feel all the small aches and pains of the day. My throat burns from yelling and my sore ankle is flaring sharply every time I take a misstep on the rocky trail. That doesn’t really matter though, because there’s still just enough time to get home before midnight and crack open that bottle of wine.

As the first day of the New Year dawns Alan Lovegreen is flown in to a nearby landing zone and helps an exhausted, dehydrated, cold and extremely relieved subject into the helicopter to be welcomed home by his happy family.

(As a side note: our calculations on the distance, direction and source of the calls was correct. The subject had indeed heard our calls from miles to the North and West and was hoarse from yelling back.)